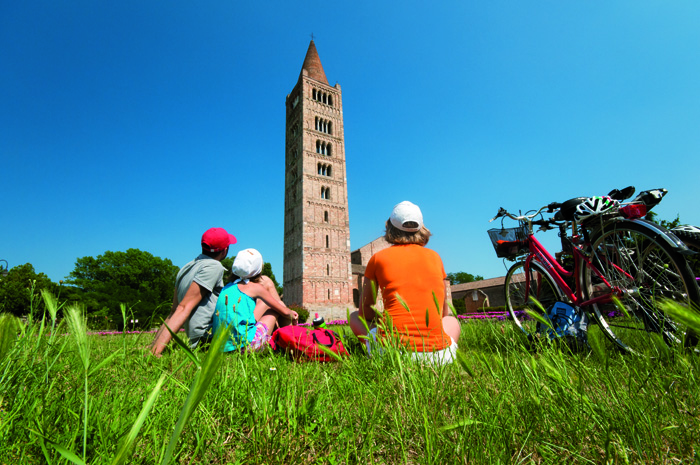 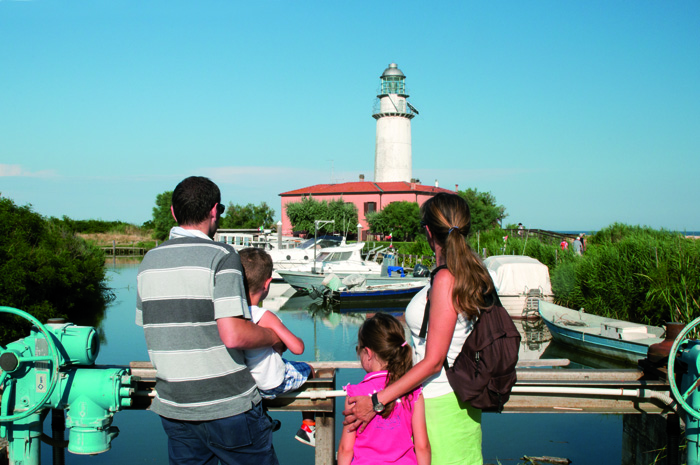 Goro
The name Goro comes from “Gaurus”, an ancient branch of the Po River of the Volano derivation.
The town was formed in the first half of the eighteenth century on the right bank of the Po, between the river and the sea, in a marshland where bumps stood.
Here the first houses were built, the huts of reed, a type of unchanged dwelling since the dawn of human settlement in the Po Delta and later replaced by brick houses. At that time exchange activities were very developed, merchant ships and part of the revenue derived from excise duties and the anchorages.
Since the beginning of the 17th century the port moved progressively towards the south-east for the rapid advancement of the coast that came, a century later, at the height of the town of Goro, starting the forming of the "Sacca di Goro".
Goro History is characterized by the continuous struggle of men against the waters of the sea and the river. It is reflected in the ancient artifacts and dredging hydraulics, as Torre Palù, Torre Abate, Balanzetta and Chiavica dell’Agrifoglio, and the lighthouses, which show the incessant change of the territory.
Until 1962 Goro was a fraction of Mesolamunicipality: that year it became independent.
Nowadays Goro is a modern harbor which preserves sections of the old fishing village. Fishing and mussel farming are in first place in the local economy and the local fleet has more than 2,500 boats.

Codigoro
Codigoro stretches in the eastern part of the province of Ferrara in the Regional Po Delta Park and is located between Comacchio Valleys and the coast of the Adriatic Sea.
It is crossed, eastwards and to the mouth, from the Po di Volano.
Up to the 1860s the territory was characterized by large expanses marsh that over time have been completely reclaimed. It is crossed by a network of canals once partially navigable, for irrigation and drainage of the vast intensively cultivated fields.
The name comes from Gaurus, once the Po di Goro, a territory that was the beginning of a bifurcation of the branches of the river: Caput Gauri.
Codigoro history leads back to the ninth century, when a Benedictines community settled in the territory of Pomposa, which at that time was located on an island bathed by the Adriatic Sea and from the branches of the Po Volano and the Po di Goro.
In those years they begun the construction of the Abbey of Pomposa which gave prominence to Codigoro and its territory by acquiring greater importance thanks to profitable agricultural land and the establishment of the Bishop's Palace: he concentrated upon himself the political government and commercial until the absorption of Codigoro by the Exarchate of Ravenna until the year 1000.
Around the year 1150 the Este began pressures to control the territory, but these years also saw the end of the prosperity of Codigoro because of the Ficarolo Rupture in 1152, due to which the course of the river Po moved north draining the waters of the Volano until the abandonment of the Abbey of Pomposa and Codigoro by Benedictine monks.In 1464 the reclamation of the territory began, promoted by the Duke d'Este and that succeeded, even if in a small way, to make Codigoro a more livable territory.From 1600 to 1604 the Republic of Venice made a change to the flow of the Eastern Po (Po di Levante) making it come out further south in Ferrara area, so that water projects brought to fruition by the Este became vain.In 1598 Ferrara went under control of the Papal States, reclamation work started again and lasted until the mid-nineteenth century, when the first pumping stations were built and the reclamation of the district Polesine of Ferrara was implemented.

What to visit
Goro

Codigoro is a great starting point to visit:

• Pomposa Abbey: one of the most important religious building of the whole Northern Italy, built in ninth century and house of the Benedictines;

• Bishop's Palace: built by the Benedictines, it is the administrative head office of Pomposa and Codigoro.

• Tower of Finance, built during the early years of the eighteenth century to control the trade routes on the banks of the Po di Volano. It was built by the Papal Government but, due to the continued erosion of the coast on which it stood, the building was completely destroyed during a storm in 1729. It was rebuilt from 1739 and completed in 1741 to be used as barracks of the Finance Guard until the early years of the twentieth century.